A Short History of 3D Printing 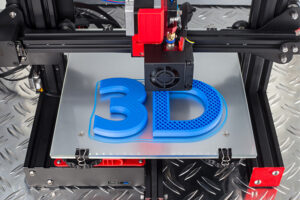 Like most technologies, 3D printing has an interesting background story.

Here’s a short history of 3D printing, from science fiction to everyday applications:

One of the first mentions of 3D printing appeared in the 1945 short story “Things Pass By” by science fiction writer Murray Leinster. It describes a machine that uses “magnetronic plastics” to create a 3D reproduction of a 2D drawing.

In 1984 Charles “Chuck” Hull filed a patent for a stereolithography (STL) fabrication system for creating three-dimensional objects. His process used ultraviolet light to cure photopolymers; it included features such as digital slicing and an STL file format. Hull was granted his patent in 1986; his company, 3D Systems Corporation, released the first commercial 3D printer, the SLA-1 in 1988.

The fused deposition modeling (FDM) process was developed the same year by S. Scott Crump. FDM is the technology used by most of today’s 3D printers. Crump’s company Stratasys marketed its first FDM printer in 1992.

The 1990s saw many advancements in 3D printing technology, including the development of laser additive manufacturing (LAM). In 1999 an organ transplant procedure was performed using a replacement urinary bladder printed using the patient’s own cells.

It wasn’t until the 21st century that 3D printing really took off. Technological advances allowed 3D printers to create a wider range of objects. New materials were developed for use in the creation of higher quality 3D printed objects, including organic “bio-inks” that can be used for medical applications. The first 3D-printed aircraft and automobiles appeared.

Thanks to these advances, the cost of 3D printers and 3D printing dropped drastically. Today, companies like ProTek Models and others offer high-quality, cost-effective 3D printing services to businesses and organizations of all types.

3D printing is used for many applications across a wide spectrum of industries, from medicine, defense, automotive, and aerospace to marketing, legal, and film and TV production. Let ProTek Models show you what 3D printing can do for your business. We’re one of the leaders in 3D printing and other additive manufacturing processes. Our clients include industry leaders like Boeing, NASA, Raytheon, Mitsubishi, Bell Helicopter, West Coast Customs, Circor Energy, Google, and the U.S. Air Force.

Whether you need a highly detailed scale model, custom automotive parts, a prototype, or expert RTV molding and urethane casting, ProTek Models is here to deliver. Contact us through our website or call us at (832) 968-6636 to learn more about how 3D printing can help your business.